1 Peter 5:8 “Be sober, be vigilant; because your adversary the devil, as a roaring lion, walketh about seeking whom he may devour: whom resist steadfast in the faith.”

Because the Devil is such a wild, mad spirit the Bible compares him to repulsive and hideous creatures. For example, in Rev 12:9 he is called “that old serpent.” Satan is not a serpent, but he used the body of a serpent in the garden of Eden, and he is like a snake with its hypnotic eyes and sly movements. In the same passage he is called “the great dragon,” for he is like a great sea animal or crocodile in treachery and hideousness. Jesus refers to the Devil as a wolf in John 10, since he is as murderous as a wolf among sheep.

In our text Peter compares this fallen, evil spirit of the underworld to a roaring lion on the prowl, a hunter and stalker of game, a very dangerous creature crazed by hunger. 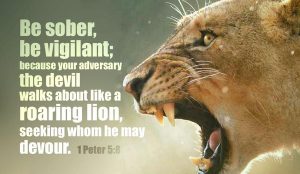 Satan was created a holy angel and enjoyed the bliss and glory of heaven for a time, but the Devil and many other angels fell into sin and were cast out of heaven. The sin of Satan may be inferred from his own words to Eve, “Ye shall be as gods,” and from his words to Jesus in the great temptation, “All these things will I give thee, if thou wilt fall down and worship me.” Pride, and the desire to be a god seems to have been the first sin of the Devil and his angels. God placed him and the other fallen spirits under a terrible curse.

The Devil is the source of all evil in this world. He is a vicious, savage spirit who seeks to destroy the works of God and in his frenzy has turned this world into a wicked wilderness . Countless numbers of people have fallen prey to the temptations of this prowling lion. The whole world fell in the fall of Adam and Eve. The old world became so wicked God had to destroy it by the great flood. The history of the heathen vividly shows us how Satan has them in his control.

Jesus knew that the Devil would be especially active in the near future. He referred to him as the “power of darkness. ” The Evil One entered the heart of Judas, caused the disciples to flee, and Peter to deny Him. He stirred up the people to demand the crucifixion of the Holy One of Israel.

Success must have twisted and perverted the mind of this savage hunter still more for he wanted to add Jesus to his list of triumphs.

We are told of the great attack on Jesus in the simple words of St. Mark, “And he was in the wilderness forty days, tempted of Satan; and was with the wild beasts; and the angels ministered unto him.”

The Devil, through the fall of man, turned this world into a savage wilderness. Jesus was in a place of desolation, surrounded by wild beasts with their snarls and roarings. Many a piercing cry went up at night as some animal became the victim of a fierier foe. The Lord began His life on earth amid the cattle in the manger and He began His ministry among the beasts of the wilds.

How odd this scene in the wilderness, Jesus fasting and pray­ing with the background noises of growls and snarls. How different this scene from the temptation of the first Adam, for then he was surrounded by all the beauties of the holy creation with all the animals grazing peacefully near by; but the second Adam was surrounded by vicious, roaring beasts, in a sin-cursed world, in one of the most desolate spots on earth.

The Beast of the Underworld appeared on the scene and began to attack Jesus. He surely must be a mad spirit to hope to overcome the Son of God Himself. After forty days of fasting Jesus became very hungry, and the Devil suggested that He convert some of the stones into bread and appease his hunger. Being repulsed, he tried again and suggested that Jesus jump down from the pinnacle of the temple. Having met with formidable resistance again, the Beast of the Underworld with an inflamed mind, offered Jesus all the kingdoms of the world if He would only fall down and worship him. He could not overcome the Lord, for the Word of God and prayer defeated him.

Is it not noteworthy that in the garden, which was like para­dise, a man was tempted and by his sin turned this world into a wilderness; and in a wilderness THE MAN overcame temptation and restored paradise to us again. Through faith in our Savior we have eternal life, for He has overcome sin, death, and the power of the devil.

Grave dangers face us with this invisible Beast of the Under­world. We read of the prowling Beast but somehow we feel that he is a thing of the past, a page from ancient history. We com­placently think of the present world as almost devoid of evil, with no devil, no original sin, no real evil. It is just this dangerous delusion which the Devil hopes to create in our minds. A beast or lion, stalking its prey, does so in a manner which does not warn the intended victim of its presence.

Peter experienced the grave dangers connected with this self-delusion and self-trust. He was warned repeatedly by Jesus, but with little effect. “If I should die with Thee, I will not deny Thee in any wise,” was his confident vow to the Lord, yet he soon fell a victim to the wiles of Satan and denied the Lord three times.

Many years later Peter wrote the words of our text, “Be sober, be vigilant; because your adversary the devil, as a tearing lion, walketh about, seeking whom he may devour, whom resist steadfast in the faith.” As the years rolled by Peter became confident again that he could resist the attack of the savage enemy, but only with the help of the Word of God and prayer.

The season of Lent has been set apart by the church to commemorate the temptation, trial, and crucifixion of our Savior. This is the time when we should withdraw our affections from the world and walk closer with Jesus in faith and prayer.

Satan has not changed, and he uses the same temptations on us as he used on our Lord. He suggests to us to be more concerned about food and clothing and other things of life. He holds before our eyes the great “successes” of the world, the men and women who have made a name for themselves. He displays to us the wealth and glory of this world and offers it all to us if we will only turn to him. Truly we are living in a materialistic wilderness and are in great danger from this prowling Beast of the Underworld.

May the Lord bless us in this solemn season and may He always answer our prayer, “Lead us not into temptation, but deliver us from evil.” He has promised to hear us for the sake of the cross of Jesus our Savior.   AMEN.

PRAYER. O blessed and holy Trinity, we thank Thee that again we are privileged to enter the sacred season of Lent. As we contemplate and meditate on the bitter sufferings and death of our Lord and Savior, may we be drawn closer to Thee and further away from the world and the things of the world. Help us over­come the old evil foe that he draw us not into sin. Keep us at all times trusting in the blood of Jesus Christ, our only Savior and Redeemer. AMEN.