Luke 9:29-35 “And as Jesus prayed, the fashion of his countenance was altered, and his raiment was white and glistering. And, behold, there talked with him two men, which were Moses and Elias: who appeared in glory, and spoke of his decease which he should accomplish at Jerusalem……………

there came a cloud, and overshadowed them: and they feared as they entered into the cloud. And there came a voice out of the cloud, saying, “This is my beloved Son: hear him.” 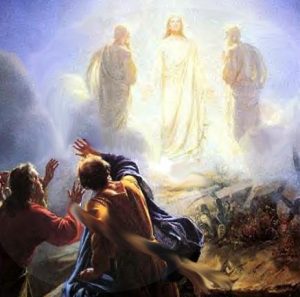 Is it not surprising that at the occasion of the two great extremes in the life of our Savior, the time of His great glory and the time of His deep humiliation, His three favorite disciples were asleep?

When Jesus was in Gethsemane we read (Matt.26:40-41), “And he cometh unto the disciples, and findeth them asleep, and saith unto Peter, What, could ye not watch with me one hour?” Had they stayed awake in the garden, how they might have refreshed Jesus in His deep humiliation. The three disciples kneeling with Him in prayer could have been like a cool drink of refresh­ing water to a parched throat.

On the Mount of Transfiguration, at the time of Jesus’  great glory, when His face did shine with heavenly light and Moses and Elijah also appeared in glory with Him, at that marvelous moment we are astonished to read, “But Peter and they that were with him were heavy with sleep.” However they did wake up in time to see the glory of Jesus and the two men that stood with Him, and so they received a foretaste of that glory which awaits all of God’s children in Christ.

When Moses came down from the mountain after speaking with God, his face shone with rays of glory because he had been close to the face of God. The prophet had to put on a veil when he spoke to the people since the reflected glory lingered for some time on his face.

It was somewhat different with the glory of Jesus in our text. He is “God of God, Light of Light, Very God of Very God.” “In Christ dwelleth all the fullness of the Godhead bodily,” Col.2:9. Jesus always was God, but from His birth until His death He did not fully use His divine attributes. The Bible tells us that Jesus humbled Himself in order to be our Savior by suffering and dying on the cross. He was indeed a lowly and humble man. But our text is an exception, for here He permitted His glory and light to penetrate His body and clothes as an amazing change took place. Matthew says, “And his face did shine as the sun, and his raiment was white as the light.” Mark tries to describe the change in this way, “And his raiment became shining, exceeding white as snow; as no fuller on earth can white them.” And Luke says, “His raiment was white and glister­ing.” One can sense that all the writers were at a loss j^for words to describe the Savior!s transfiguration. Yet this glory was only partial. Jesus in mercy withheld His full glory for no sinner could look upon the full glory of God and live.

The Apostles were having a foretaste of heaven as they were beholding Jesus in partial glory, Heaven is that place where we shall see God face to face in all His glory. Little wonder Peter said, “It is good for us to be here,” because they were almost in heaven and it was very, very good. Do we need any further proof that Jesus is “Light of Light”? When John says (John 1:14) “We beheld his glory,” he no doubt had also this holy moment in mind. Peter never forgot this short period of glory either for he states (2 Peter 1:16), “We were eyewitnesses of his majesty… when we were with him in the holy mount.” How could anyone for­get a foretaste of eternal glory?

Moses and Elijah appeared with Jesus in glory. They were great men of the Old Testament and were immediately recognized by Peter and the others. They appeared in heavenly glory, the same kind of glory we all hope to receive. They were in full glory, as glorious as is possible for creatures to be.

“They spake of his decease which he should accomplish at Jerusalem.” Moses and Elijah were intensely interested in what Jesus would accomplish by His sufferings and death at Jerusalem. They had believed in Him, the coming Messiah, while they were on earth, and that is the only reason why they are now glorified Without Christ it is impossible to see God in glory. There is a beautiful harmony between the Old and the New Testament, the only difference is in point of time, the Old states that He was going to come, the New teaches that He has come. Moses, Elijah, Abraham, Isaac, Jacob, and all the other saints of God in the Old Testament received salvation by faith in the coming Lamb of God.

May we all be found among the great throng around the throne of God in glory. We can be saved by accepting His “decease11 as having taken place in our stead. When we get to that place of eternal glory we shall better understand what Peter meant when he said, “It is good for us to be here.” This foretaste of glory stimulates our appetite and yearning for the better world to come.

God is a spirit and therefore cannot be seen with our present eyes, no more than we can see radio waves or gravity. Whenever the Bible speaks of God appearing and talking, He always assumes some form or covering. Moses wanted to see God’s glory but he was told (Exodus 33), “Thou canst not see my face; for there shall no man see me, and live.” Even the light from an atomic blast could blind us if we did not take proper precautions. Think what the light of the glory of the Creator of things would do to us if we looked upon Him in our sinful state.

The Apostles could see Jesus because His glory was only partial and they could see Moses and Elijah in glory too, but that was about all they could stand. In mercy God covered Him­self and His glory with a cloud to protect the Apostles, other­wise none of them would have survived to tell us of this event.

“This is my beloved Son; hear him.” The Father sent His Son into the world to redeem us all, and He did. The Father says to all of us, ”Hear him,” especially when the Son tells us (John 6:40) “This is the will of him that sent me, that every one which seeth the Son and believeth on him, may have everlasting life.” By hearing the Son we shall all inherit the same glorious condition which we saw in Moses and Elijah.

In this Epiphany season, we learn that Jesus revealed His glory to us for our contemplation and joy. Such a revelation of His majesty strengthens our faith and trust in Him and enables us to walk closer and closer with Him. Would it not be fascinating to brush aside the clouds and see the glory and marvels of the Lord? It is impossible now. But if we will accept Jesus as our Savior in true faith, He has promised us eternal life where we shall not just received a foretaste of glory as on the holy Mount, but shall see Him forever in full glory and “hunger no more, neither thirst anymore,” There we will be better able to sing, “For thine is the Kingdom, and the power, and the glory forever and ever. AMEN.

PRAYER. Lord Jesus Christ, having now had a foretaste of Thy glory which Thou hadst with the Father and the Holy Ghost before the world began, we long to be with Thee in that land of glor­ious light and happiness. O Lord, our thoughts are ever turning heavenward where our eternal home is. Keep us steadfast in the true faith unto our end, so that with all the holy angels and the redeemed we may join in singing of Thy kingdom, and power, and glory, forever and ever.  AMEN